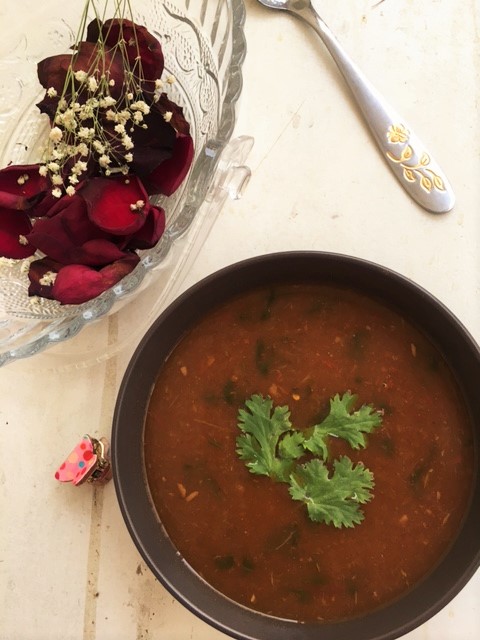 Rajma chawal is a very famous North Indian dish cooked frequently in almost all Punjbai households every week. It is a staple dish, when mothers in North India are setting menu for a get-together. It is that dish that takes away all the attention from the other dishes cooked at a family dinner, no matter what it may be. 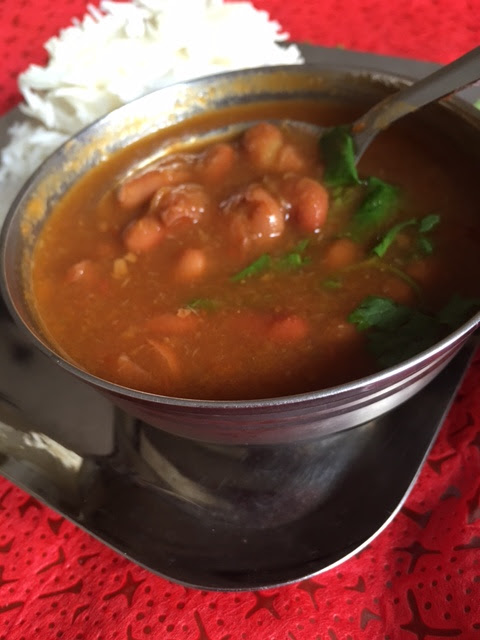 These were the questions I and my siblings have grown up asking and creating a scene and picking up a fight over. :-) 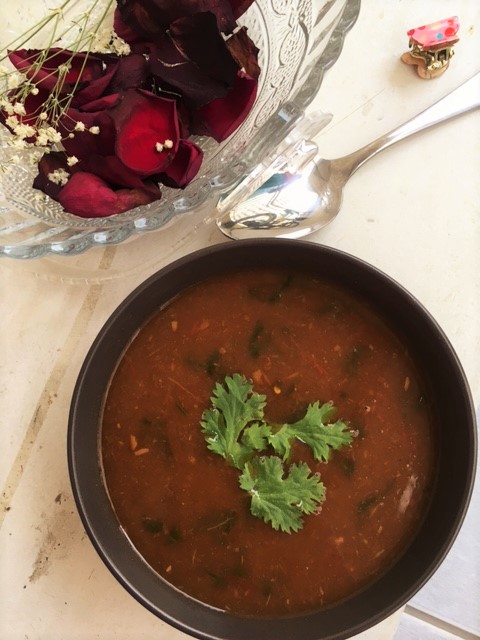 I make it a point to always cook some extra rajma chawal. I love the taste of the rajma my mother cooks and how I make rajma is totally inspired by her recipe. Though the ones I make, taste very similar to that of my mom's rajma but then they only taste similar. The real taste of my mom's rajma which is never over-cooked that every bean of rajma can be seen intact, the gravy is never too thick neither too watery. The spices are never too much nor it tastes bland. It is always the perfect taste. Tender, rich, drool-worthy and just awesome.

Rajma are high in protein and full of carbohydrates. It is cooked with a lot of whole spices and a thick gravy of onions and tomatoes, stewed over low flame for a long time. Rajma is one of the staple foods in North India loved religiously by everyone. Rajma is mostly served with boiled rice and thus the combination 'rajma-chawal' came into being. However, rajma tastes equally great with hot parathas or flatbread and phulkas or chapattis. My mother always makes rajma early in the morning and serves fresh, hot and bubbling bowls of these red kidney beans with hot and crunchy parathas slathered with homemade butter and hari mirch ka achaar or green chili pickle. It is one thing I used to love waking up to before my marriage. :-) 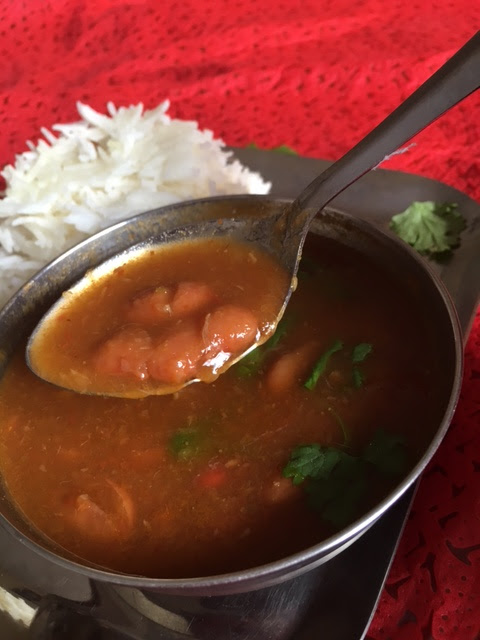 Many cute jokes and sweet one-liners are based around this beautiful dish. One of them is "I can't make everyone happy. After all, I am not Rajma Chawal." :-) Here is another one: "Whenever life seems difficult. When things all seem to be going wrong. When the world is against you. Just eat rajma chawal." :-)

Let me share with you how I make this delicious curry step by step accompanied with lots of pictures. Once again my recipe is stolen from my mother. :-) 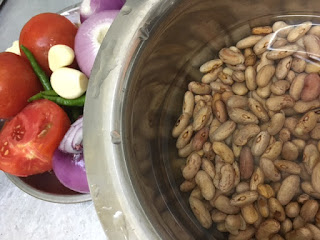 Boiling and pressure cooking the rajma:

1) Take a large pressure cooker. Add water and bring to boil. Now add the soaked rajma. Put the whole garlic cloves with 1 tsp of turmeric powder and salt, to taste. 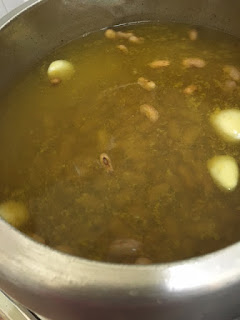 2) Put on the lid and let it whistle 4-5 times on high and then keep it on low flame for 20 min. Switch off the gas and do not open the lid until all moisture evaporates.

Making the tadka or curry:

1) While the rajma is whistling away in the pressure cooker. Heat oil in a non-stick pan. Add the onion paste and let it brown on low flame until brown. Saute in between. 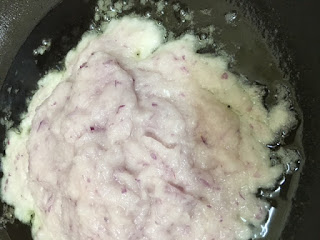 2) While the onions are browning. Grind the tomatoes and green chilies to form a puree in a blender. 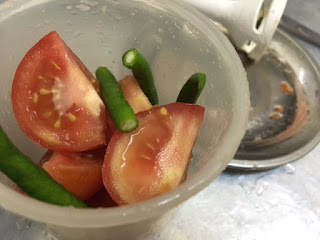 3) Keep the tomato puree ready and add to the browned onion paste. 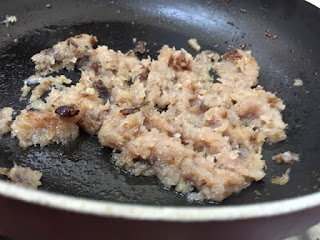 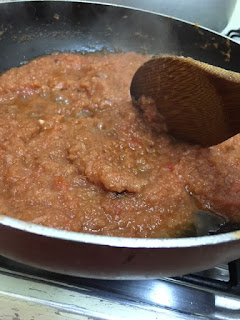 5) When the oil separates from the tomatoes, the tadka will look like this: 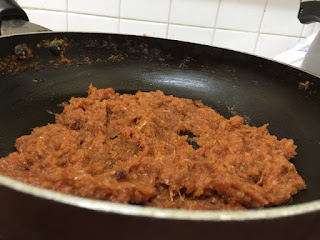 6) At this stage add your spices - turmeric powder, red chili powder, coriander powder and salt. I don't use garam masala as I find it too spicy for Little M. Mix well. 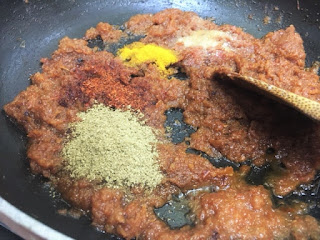 7) When all of the steam has evaporated, open the pressure cooker and with a spoon take out the garlic cloves. You can totally skip this step and just try to mash the garlic cloves inside the cooker. 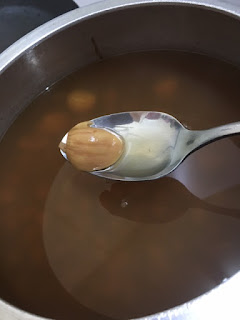 8) Add the garlic cloves to the tadka. Mash and mix well. 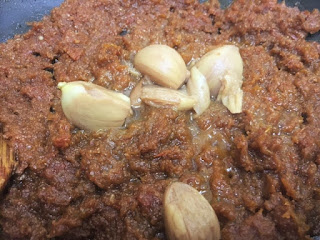 9) The tadka is now ready to be added to the rajma. 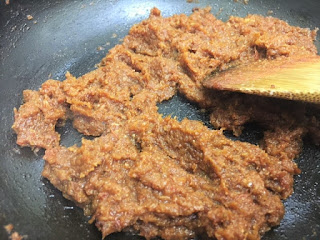 10) Add the tadka to the pressure cooker. Mix well and bring to boil.

* If you find it water, let it boil uncovered for a good 10 min and it will thicken.

* Check your rajma if its cooked by trying to mash using a spoon. If you think its still uncooked. Put the lid back on the pressure cooker and let it whistle for 10-15 min on medium flame.

* To cut the cooking time of rajma, make sure to soak it overnight. 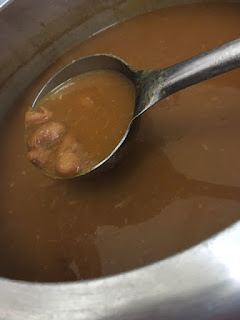 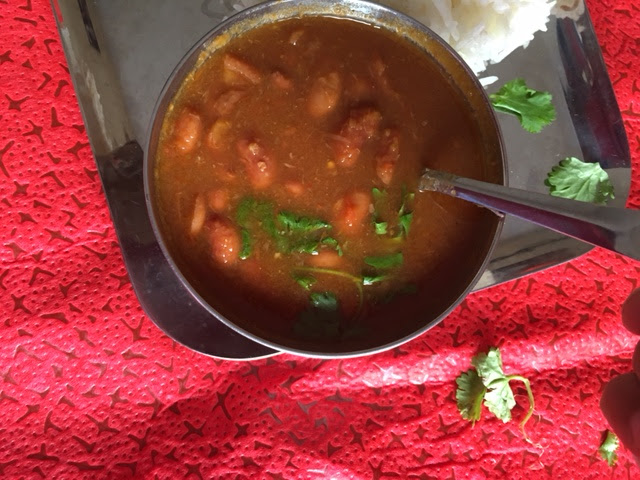 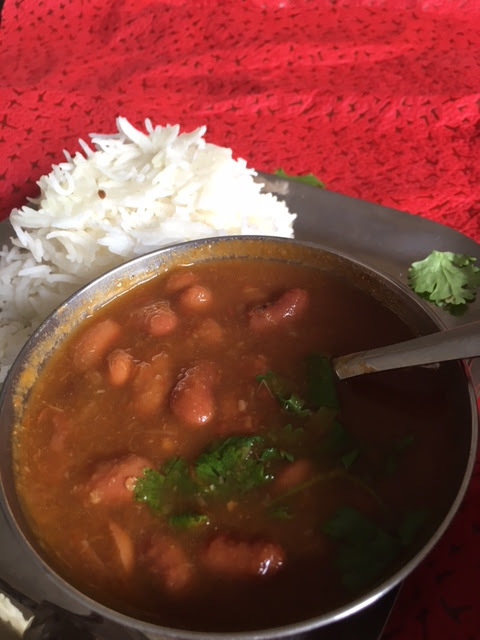 How do you like to eat your plate of rajma chawal?

Do you like to make it watery or you prefer a thick gravy?

Do you like to include some ginger in your tadka?

Tell me all about your secret recipe for cooking rajma.

I would love to read your thoughts.. 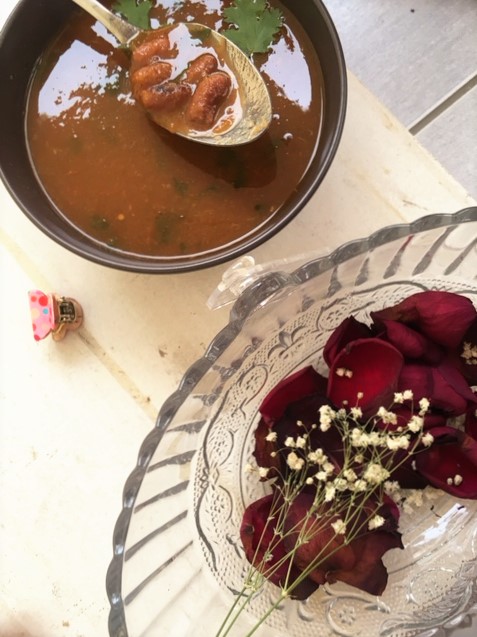